Narrow your results by:

Collection of circulars, pamphlets, speeches, and other ephemera related to the Wilmot Proviso. The Wilmot Proviso was introduced in the United States House of Representatives on August 8, 1846 by Congressman David Wilmot as a provision of an appropriations bill. The proviso sought to ban slavery in any territory acquired from Mexico as a result of the Mexican-American War. The bill passed in the House but failed in the Senate. Although it did not pass into law, the Wilmot Proviso is credited with intensifying the slavery debate in the years leading up to the Civil War.

The W.B. (William Buckhout) Tuttle Papers consists largely of blueprints, correspondence, land leases, maps, newspaper articles, and reports. A few photographs are also found in this collection. The material spans from 1894-1954, but the bulk of the material is from the twentieth century. The majority of the material relates to military history of San Antonio and the surrounding area; specifically, Tuttle's involvement through the Chamber of Commerce Military Affairs Committee in the development of Kelly Air Force Base, Randolph Field, and other military installations in the area. This collection also includes records of Tuttle's work in the creation of Big Bend National Park, his work for the War Production Board, and his work for the Quartermaster Advisory Committee. There is significant correspondence with other San Antonio business leaders, as well as government officials including Maury Maverick, Sr. In addition to family records and records of his own military service, the collection also includes copies of speeches and articles written by Tuttle on a variety of military-related topics.

A commonplace book used by Violet Alice Haynes Bowles (1873-1953), in which she recorded poetry, correspondence, genealogical research, and other notes. Much of the contents reflects her views as a member of the Daughters of the Confederacy. 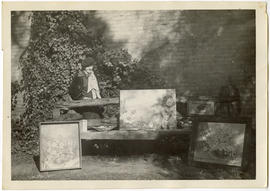 This collection contains material from Ursula Lauderdale, a Texas artist and former art instructor at Trinity University. It includes a small scrapbook, photographs, correspondence, documents, and news clippings. The scrapbook, clippings, membership cards, and many of the photographs help to illustrate her work as an artist during the early 20th century.

The collection consists of administrative files regarding media relations of the center, with a funding prospectus and two annual reports. Additionally there are several published reports produced by the center.

The T.M. (Thomas Moore) Paschal Papers consist of letters, legal documents, bills, advertisements, telegrams, programs, and newspaper clippings. The material spans from 1851-1921. The material in this collection covers a wide range of subjects including Paschal's public career and law practice; land deals in the United States and Mexico; San Antonio civic affairs; and inventions including the Judge's invention of an electro-chemico radio active heater.

This collection consists of issues of the Trinitonian; from its first appearance as a monthly campus magazine and annual in1900, through its present day weekly circulation as the student-run newspaper of Trinity University.

Two documents related to slavery in Texas, mounted onto a piece of cardstock. The first is an 1860 contract for the lease of an enslaved boy named William in La Grange, Texas. The contract is signed by M.H. Hall, R. L. Breeding, and Joseph H. Eaves; the enslaver of William is D.K. Pope.

The second document is an 1867 contract between James Frazor and Sally Frazor, laying out terms for Sally to be employed by James as a domestic laborer. Based on the date, description of the labor and remuneration, names, and Sally's illiteracy, it is likely that Sally was formerly enslaved by James.

Brochure presenting the history, charter, and plans for the Texas Sculptors Group.

Legal document transferring the title for land in Texas (then a part of Mexico) from James Miles, Logan Vandeveer, and Edward Tatum to David Breeding.

A listing of legal actions in Tehuacana, Texas, from January 20, 1871 to June 26, 1875. Most of the records are for deeds, powers of attorney, and contracts. Trinity University is mentioned as a party in actions scattered throughout the book. A. Berry, secretary of the Board of Trustees, is a participant in many actions. A list of subscriptions to the university is recorded on July 20, 1872.

Two volumes of property assessments conducted in the city of San Antonio, Texas. The first is dated from 1853 by assessor José María Rodriguez. The second is dated from 1864 by assessor A. Eule. The assessments list and provides values for property owned by San Antonio citizens, including parcels of land, livestock, wagons and farm equipment, jewelry, and miscellaneous items. Enslaved people are also listed under property assessed; the names, sex, and ages of enslaved people are not listed.

Collection consists of eighteen concert programs from the San Antonio Symphony Orchestra, dated between 1915 and 1918. 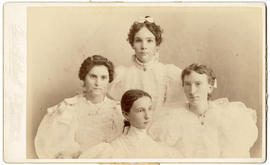 This collection contains material from the institution's board of trustees and registrar's office. Publications, ephemeral materials and alumni contributions complete this collection

1849 letter from Peck & Van Hooce law firm of Tuscaloosa, Alabama to Samuel A. Maverick, with a copy of Maverick's 1850 reply on the same paper. The letters concern the depositing of money from a business matter.